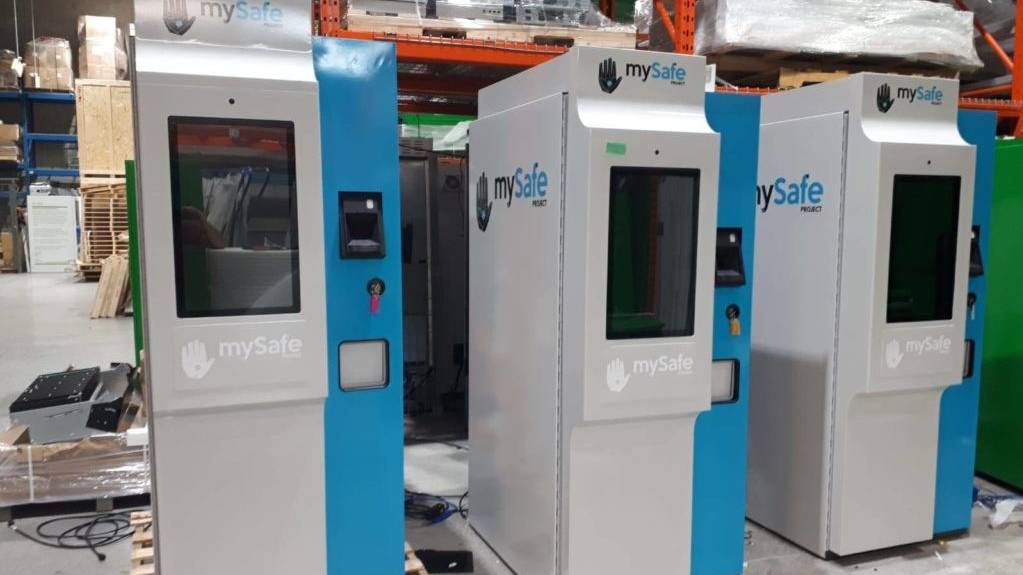 Alarge, blue screen lights up the front surface of a grey appliance standing by a brick wall. An illustration of a palm moving toward a sensor explains how people who use heroin are identified in order to access their preauthorized daily dose of hydromorphone, a powerful opioid. This is Canada’s first safe supply vending technology, MySafe, whose expansion has received nearly $3.5 million in funding from the federal government.

Social restrictions due to COVID-19 have exacerbated Canada’s epidemic of drug toxicity deaths, as people who use opioids had no option but to inject alone, without the company of friends equipped with the country’s now widely available Naloxone kits to revive them if needed. While the total number of Canadians who lost their lives to fentanyl poisoning last year is not yet tallied, the pandemic’s most hard-hit province, British Columbia, saw 1,723 people die from drug toxicity in 2020 — a 75 per cent increase over 2019. According to the federal government, 82 per cent of accidental opioid toxicity deaths in 2020 involved fentanyl, and 99 per cent of the fentanyl detected in opioid toxicity deaths was non-pharmaceutical.

Since the first safe supply opioid dispenser was installed in Vancouver in early 2020, the primary prescribing doctor of the MySafe project, Dr. Mark Tyndall, says he has seen tremendous success with patients who were previously at risk of poisoned street drugs. A low-barrier machine aids individuals who have “dropped out of their prohibitively strict methadone programs,” he says, and they don’t have to constantly engage with a pharmacist who may not understand the complexities of addiction and trauma and may even stigmatize opioid maintenance therapy.

Perhaps most importantly the machines allow patients to access drugs without interacting with another person, creating a space that is free of stigma and judgement.The aim is to keep people alive, not cure every medical condition they’re dealing with all at once. That would be asking for a medical miracle.

Dr. Tyndall is outspoken about prioritizing the need to save lives over forcing people to abstain from substance use while on methadone plans or sending them to treatment facilities — places his patients have often felt judged and even harassed due to misconceptions about their lived experience. He’s pleased to see his program receive funding from Health Canada but wishes it came earlier; too many lives have been lost in the interim.

“MySafe remains a really good way to attract people and to distribute a safe supply of drugs, but everything takes so long, which is the frustrating part,” he explains over the phone. “In 2015 when people were noticing the uptick in overdose deaths, we should have been doing a lot more. So that part is a bit discouraging.”

Vending machines will be set up in three additional cities — Dartmouth, Nova Scotia; London, Ontario; and Victoria, B.C. — thanks to funding from Health Canada’s Substance Use and Addictions Program. This will provide an opportunity to evaluate the potential of rolling out a safe supply of pharmaceutical-grade drugs to the country. During a crisis when every single day counts, barriers to access should be knocked down, according to activists and experts alike. The MySafe machines are touted as an immediate way to implement a safer alternative to the toxic street drugs that are killing people.

Before the expansion, compiling data had not been as feasible. With only one machine in operation, Dr. Tyndall says, “we really weren’t in a position for a comprehensive evaluation. A lot of the information was anecdotal, people I’ve seen improve who use the machine.”

He’s optimistic about the interest in exploring alternative ways for people to receive their safe supply, but knows, as doctors do, that rigorous study is necessary to convince health authorities. “I haven’t been in a position to write my New England Journal article about the evaluation,” he jokes. “Now that we have some funding, I understand that we need to gather evidence to support it.”“If you get up in the morning and you feel drug sick, you have a place to go to get a safe supply of drugs. That’s the crux of it, and the idea is then people have time to work on other things.”

A professor of the University of British Columbia’s School of Population and Public Health, Dr. Tyndall also understands that government policy is impossible without public support, and destigmatizing substance use. “So it’s following the slow, torturous road that everything else does. But it’s just so obvious to me that people need a safe supply. It’s not happening fast enough for all the people that are buying fentanyl and dying.”

The anecdotes from Dr. Tyndall and the MySafe pilot project communications are strong — they point out that the answer to this crisis lies in keeping drug users alive. If addiction is defined as “continued use despite consequences,” expecting people to simply stop using drugs because they might be lethal flies in the face of science. In Dr. Tyndall’s experience, the only option is providing a safe supply that isn’t tainted with unknown poisonous substances — and he says every single patient in his program has done better when given that option.

“Two or three people are no longer even on the program because they basically graduated,” he notes. “A couple more aren’t using drugs at all right now, and there’s one guy I still write hydromorphone scripts [for] but he picks them up once a week now. He doesn’t need to come every day to the machine. So there have been some real personal success stories. I would say everybody is using fewer street drugs.”

In contrast to more widely understood and touted methadone programs, safe supply isn’t merely a stepping stone to suboxone (another treatment for opioid dependence) or forced abstinence, in Dr. Tyndall’s view. Explaining how the current medical model approaches opioid addiction, he says, “In these programs, if you’re still using some drugs then [the] program’s failing, whereas I’m saying, ‘If you cut down your street use of fentanyl by 80 per cent, that’s a huge success.’ It means they’re 80 per cent less likely to get a bad batch of drugs and die.”

Dr. Tyndall tells me that a lot of users he knows “are still dabbling around with fentanyl — and that’s acceptable.” He wants to meet people where they’re at. “I’ll try to work with people and obviously the objective is that they would completely stay away from buying unknown drugs, but for many, that’s not going to happen quickly.”

When we touch back on the idea of taking a pharmacist out of the picture, I inquire whether having a compassionate prescriber might have added to the success he’s seen in MySafe. Dr. Tyndall recognizes the importance of positive human connection in combating addiction but understands that everyone has limits to both their understanding and their empathy — especially in harder economic times. The aim is to keep people alive, not cure every medical condition they’re dealing with all at once, he reiterates. That would be asking for a medical miracle.

“If we really want to make this open to the people most at risk [of dying], then we can’t lay it with a bunch of medical obligations,” he says. “The idea is that people can access the drugs from a machine and they don’t have to talk to anybody. They just get it and they go do what they need to do. It’s hugely beneficial to a lot of people who have had it with the medical model.”

His patients have already tried the available treatment options and they didn’t work. “We can’t think, ‘If only they knew how good our methadone program is and how good our medical models are, they’d all obviously choose that.’ No, the systems failed them, multiple times.”

Amid reports that another harm reduction vending machine has been busy since its March installation in Sackville, New Brunswick, Dr. Tyndall hopes to see continued success. He remains adamant that the technology is about offering people who use drugs and are at-risk a non-lethal drug supply.

“If you get up in the morning and you feel drug sick, you have a place to go to get a safe supply of drugs. That’s the crux of it, and the idea is then people have time to work on other things.” His vision going forward is an added feature on the machine that offers telemedicine, where the drug user can speak with their prescribing doctor if they want to by simply calling them on the screen.

But for that, more funding and public support will be necessary.