Doctor on London’s frontlines weighs in on opioid dispensing machine 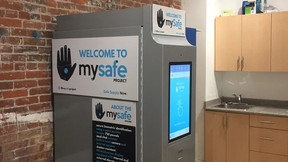 “Coming to the pharmacy once a day can be difficult,” Dr. Andrea Sereda said of her patients, 95 per cent of whom fill a prescription for medical-grade opioids once a day.

“Sometimes they may not feel safe with other people who may be in the neighbourhood. Sometimes they may want more discreet ways of picking up their medication. Sometimes when people are sleeping rough, having an entire day’s dose with them can be problematic.

“The machine offers solutions to all those things.”

It means pickups aren’t restricted to certain hours, the way they are at a pharmacy. Those in the program can choose to go multiple times a day to pick up their drugs, which helps control use and the number of pills being carried around.

MySafe can hold drug supplies for up to 48 patients, although the pilot may not initially include that many. London’s safer supply program, which Sereda leads at the London Intercommunity Health Centre, cares for 300 people.

They are prescribed opioids to keep them from seeking more dangerous, illicit versions on the street. The illegal versions aren’t monitored or tested and can be cut with all sorts of other substances, unbeknownst to the user.

“Not every patient needs the machine. Every single patient has unique struggles, and this is just one more tool in our toolbox,” Sereda said.

Right now the MySafe machine is being programmed and tested. Its future location hasn’t been made public yet.

Sereda cautions MySafe isn’t a “free for all,” like some descriptions of a “drug ATM” have implied. It’s only for specific patients in the safer supply program, who are prescribed medical-grade opioids by a doctor and are chosen specifically to use that machine.

The patients will still check in with doctors or nurses at a health clinic, usually about once a week, which is one of the biggest selling points of the safer supply program run out of the Intercommunity Health Centre. It’s based on a harm reduction approach, by providing people who use drugs a safe and stable supply to reduce the risk of overdose and death from unregulated or tainted drugs sold on the street.

“It’s not just about the drugs. It’s about dismantling those barriers and the stigma this group of people have experienced most of their life and pulling them back into health care,” Sereda said.

Since it began several years ago, that safer supply program has helped improve the health of many patients, its boosters have said. It builds trust between people who use drugs and health-care professionals, and helps treat and manage infections, chronic conditions and other medical and social issues.

London, like elsewhere, has struggled with an opioid crisis that’s claiming lives and driving hospitalizations and overdoses.

Last year, between January and the end of the September — the latest data that’s available, some of it preliminary — there were 73 opioid-related deaths in London and area. That’s up from 44 in the same period the year before.

The safer-supply program is, in part, a response to the scourge of deadly fentanyl, a hyper-potent synthetic opioid 100 times more powerful than morphine.

A single hydromorphone pill can sell on the street for $60. Fentanyl sells for less and requires much less to get high.

The pandemic has created new concerns, as the drug supply dwindled with borders closed and opioid overdoses and deaths climbed.

Sereda said London was chosen to be part of the MySafe pilot because the city is home to the largest safer-supply program and considered a national leader.

London is also a common and frequent test market for new products.